EEA funds and the “Education” Program

On December 20, 2017, international agreements (Memorandum of Understanding) were signed allowing the launch of the third perspective of the European Economic Area Financial Mechanism (EEA MF) and the Norwegian Financial Mechanism (NMF) for 2014-2021. One of the implemented programs is Education (EEA FM). It will be another program for which the role of the Operator is performed by the Foundation for the Development of the Education System (FRSE). The aim of the Program is to reduce economic and social differences within the EEA and to strengthen bilateral relations between Poland and Iceland, Liechtenstein and Norway in the field of education. The EEA Grants represent the contribution of Iceland, Liechtenstein and Norway to creating a green, competitive and inclusive Europe. There are two general objectives: reducing economic and social inequalities in Europe and strengthening bilateral relations between the Donor States and the EU-15 countries in Central, Southern Europe and the Baltic Sea area. The three Donor States cooperate closely with the EU under the Agreement on the European Economic Area. As part of the Education Program and the result of won grant competitions, Akademia Muzyczna im. I.J. Paderewski in Poznań, uses co-financing in the amount of: EUR 34,420 (Component No. II) and EUR 168,912 (Component No. IV) received from Iceland, Liechtenstein and Norway under the EEA Grants.

The EEA Grants represent the contribution of Iceland, Liechtenstein and Norway to creating a green, competitive and inclusive Europe.

There are two general objectives: reducing economic and social inequalities in Europe and strengthening bilateral relations between donor states and the EU-15 countries in Central and Southern Europe and the Baltic Sea area.

The three Donor States work closely with the EU under the Agreement on the European Economic Area (EEA). Donors contributed EUR 3.3 billion as part of successive fund programs in 1994–2014. EEA funds for 2014–2021 amount to EUR 1.55 billion. The priorities for this period are: # 1 innovation, research, education and competitiveness;# 2 social inclusion, youth employment and poverty reduction;# 3 Environment, Energy, Climate Change and Low Carbon Economy;# 4 Culture, Civil Society, Good Governance and Fundamental Rights;# 5 justice and home affairs. The EEA Grants are jointly financed by Iceland, Liechtenstein and Norway, whose contributions are based on their GDP. Eligibility for the funds results from meeting the criteria set out in the EU Cohesion Fund for Member States where gross domestic income per capita is less than 90% of the EU average.   January 1, I.J. Paderewski Academy of Music in Poznań, started the implementation of the project “Edu-Action 2022-2023: building an educational strategy supporting social inclusion and the development of remote education. Polish, Norwegian and Icelandic context ”, implemented in cooperation with institutions from Norway (University of Agder, www.uia.no, Skien kulturskole www.skien.komunne.no), Iceland (Menntaskóli i tónlist www.menton.is, The Iceland University of the Arts www.lhi.is) and Poznań (Karol Marcinkowski University of Medical Sciences). Project activities include: preparation of another monograph devoted to the issue of social inclusion, preparation of another publication in Braille notation, promotion of e-education by preparing a series of on-line music workshops, as well as development of human potential – by strengthening students’ soft skills.

The International Education Forum was held in Iceland – the program included lectures, workshops, concert and discussion panel. Information about the activity were put also in the partners’ social media and on the information board of the Harpa complex. 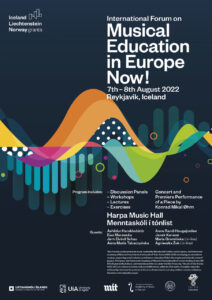 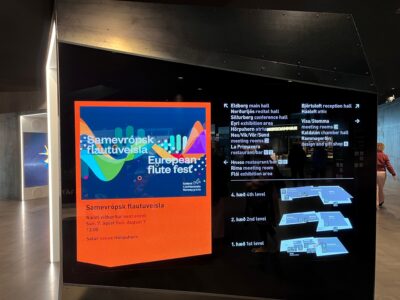 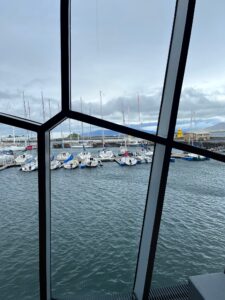 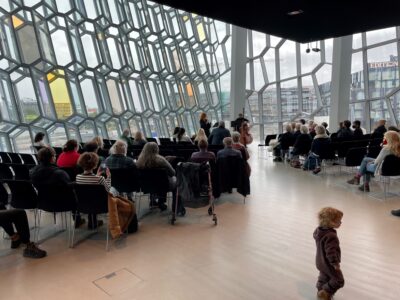 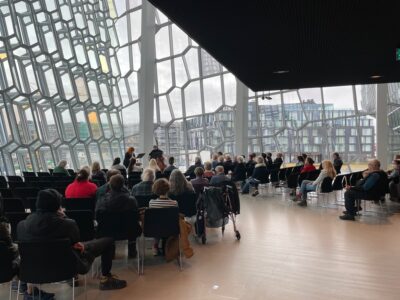 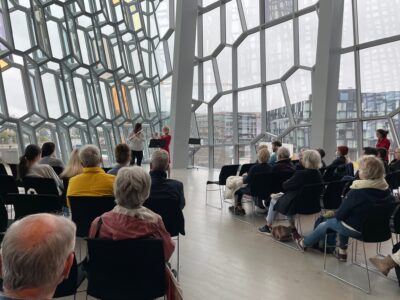 Promotion of the Project in Norway!: link

On January 27th, 2022, a press conference was held to inaugurate the project: 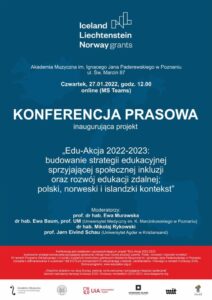 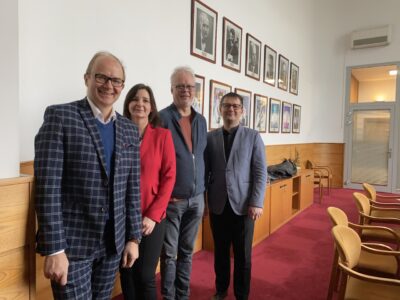 In the photo (from the left): Mikołaj Rykowski, Ewa Murawska, Jorn Schau and Szymon Musioł.

On March 9th, 2022, the first of the dissemination activities under the project took place – the 15th Academic Forum: “Education as an impulse for social inclusion”. 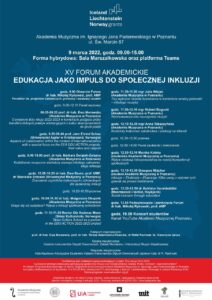 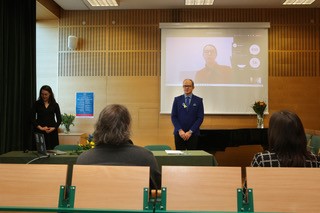 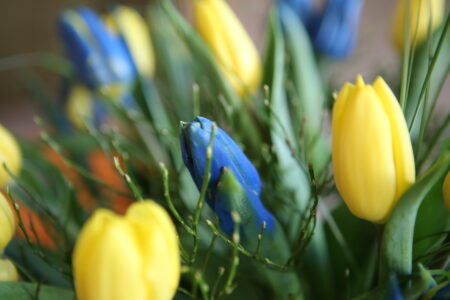 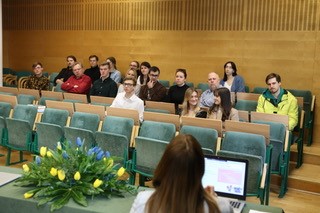 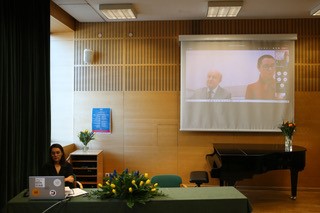 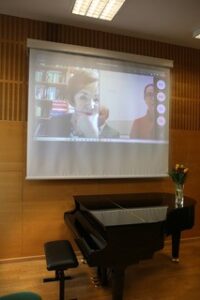 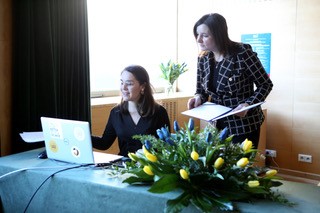 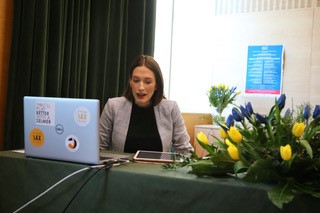 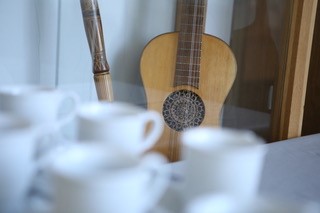 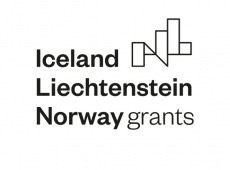